Birmingham A 5-1 Leeds A

With six lads called up to play for the city, The Ton were well represented as the BPSFA team played their annual match against Leeds for the Bernard Day Memorial Cup.

The boys didn’t fail to impress and The Ton influence was stamped all over the 5-1 win. Troy bagged himself a brace of goals and Cameron smashed in a stunner of his own. Kane captained the team and put in a man of the match performance, whilst Rio caused chaos down the right wing and then the left. In defence Kye made the fullback position his own, with Sam doing what he has done all season, being exceptionally hard to get past!

Overall the team were incredible, and the contribution of the five Sutton Coldfield boys and Jhadell from Harborne were equally impressive. Well done boys, you did your city proud! 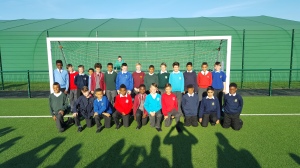