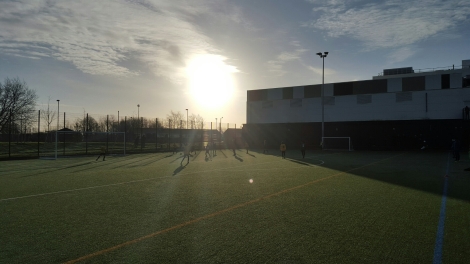 On a cold and frosty morning, the boys waited anxiously for confirmation that the games would go ahead. Once all three referees had inspected the surface and given it the thumbs up, it was time to roll up our sleeves and tackle our old friends Sutton Coldfield.

It was a tight game throughout, with The Ton arguably having the better of the ball, particularly during the first three quarters of the game. With Rio starting in defence, the lads looked to switch play and attack at every opportunity. Sutton were pressing us high up the pitch and getting very tight on us every time we got the ball, we played some lovely passing football in order to get ourselves out of trouble on a number of occasions.

The goal came courtesy of a Kane direct free kick and it was no less than we deserved. However Sutton Coldfield are a quality outfit, as we know only too well and they put us under a lot of pressure throughout the final quarter of the game. Fortunately we managed to see out the game and claim the three points.

Our second game saw another shuffle of the pack, with Rio being asked to marshal a defence of one, and Kane and Troy linking up to form a mouth-watering attack. The attacking line-up worked a treat, with the lads scoring seven goals during 20 pulsating minutes. Four of those goals came from Troy and Kane, although if it wasn’t for the heroics of the East Birmingham keeper they’d surely have had more. In midfield, Ilani was bossing the centre of the pitch, whilst Cameron, Kye and Samim provided a constant threat down the wings. It was possibly our best illustration of attacking football this season. Roll on the final!

Next up was the B Team, which was once again made up largely of u10 players. Che, Ilani, Taylor, Cameron E, Kian and Gerard certainly showed the older, bigger boys how it should be done! In a game where we created multiple chances, three of which crashed off the woodwork and another that was cleared off the line, we fell victim to a Sutton Coldfield sucker punch when they scored against the run of play.

Following that blow, we told the boys that they had to be more clinical during their second game, which is exactly what they did! With William and Ilani solid at the back, Che and Oakley were able to attack East Birmingham from wide positions, the former using his blistering pace to great effect. In the centre of the park Pharrelle was working his socks off, creating a number of chances for Cameron up front. The Marsh Hill Primary School finisher bagged himself a brace, before Taylor and Rio smashed in a goal a piece. The 4-0 win was exactly what the doctor ordered, after the young B team had narrowly lost their first three games of the new year.

Overall the lads should be incredibly proud of their efforts, with a special mention reserved for the three u11 boys who acted as mentors for the u10 lads – Tion, Oakley and Pharrelle. Well done lads!

Now what? We have one more game to play in the league stage of the competition, although we have already made the final, where we’ll meet Sutton Coldfield. This will be the fifth final that we have made this season and the fifth time that we’ve played Sutton Coldfield in a final this season. Deja Vu! It’s sure to be a screamer!

Men of the Match:

Under 11s – Rio: The Birches Green baller normally plays on the wing but today he was asked to drop back into defence and did a sterling job, initially with Sam but then on his own. Two games, two wins and zero conceded.

Under 10s – Ilani: A number of the boys could make a strong claim for this honour after performing brilliantly. However Ilani did it for both the u10s and u11s so it’s only fair that he picks up the MoM award.

Well done lads, you certainly warmed everyone up this morning!