Man of the Match: Everyone dug deep and battled their hearts out but Gerard stole the show with a series of stunning saves!

We knew this was going to be our toughest game of the season so far as Dudley are a quality team. However it wasn’t made easier by the fact that we still didn’t have a full team 30 minutes before kick off. Following a series of unfortunate events, our squad, in terms of numbers, was stretched to its limit. However when you have warriors like the ones that we have, no hurdle is insurmountable!

From the start of the game, Dudley pushed forward and took a grip of the game. Nevertheless the first twenty was slightly scrappy, with the two best Dudley chances being through balls that their number 9 attempted to latch onto, only for Gerard to play sweeper-keeper and clear.

The second twenty saw Dudley’s superior possession translate into more concrete goal scoring opportunities. With Blessing playing like a young Bryan Robson in the centre of the park, Che chasing down every last ball and Taylor repelling everything, including the kitchen sink, the spine of the side held firm under unrelenting Dudley pressure. Yet once again it was left to Gerard to steal the show, this time with a sublime one-on-one save.

Before the final third, we asked the boys to dig deep and to be honest when answering, “Have you played as well as you can?” Only Gerard and a more hesitant Blessing said they had. The other eight boys concluded that they hadn’t and could therefore give more to the team. This was a brilliant sight to see. The lads were standing up and taking responsibility for their own actions. True leadership. 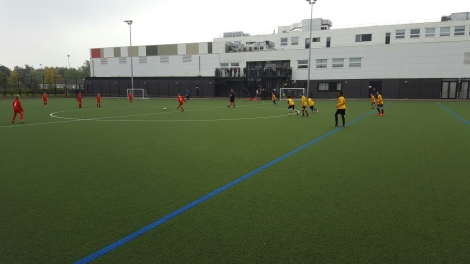 For the final third, Blessing shifted up front, with Che drifting out to the right and Danny slotting into the centre of the park. Blessing was making a nuisance of himself up front, playing aggressively and attempting to keep the ball in the Dudley third for as long as possible, even if it was just to give the rest of the lads a break. Then with ten minutes to go, the midfielder schemer Kian B popped up and scored from distance. As the ball looped high and over the Dudley keeper, the boys’ relief was evident.

It would have been easy for them to have lost their shape and composure at this stage but they refused to give up on what they had worked so hard for. They were brilliant! From William and Tiarno, to Kian ON and Danny, plus lets not forget the debutante James, who only the night before had marshalled the u10s defence. Every one of the boys battled to ensure that the three points stayed in Saltley.

We have been on the end of such results over the years, so we know how low Dudley will possibly feel. However they have nothing to be down about, as on that showing they’ll achieve great things this season.

The Ton boys tested my nerves throughout a morning, that in hindsight was a truly brilliant spectacle! Well done boys, your grit, determination and bravely were amazing! You stars!