Erdington and Saltley under 10s vs. Sutton Coldfield United 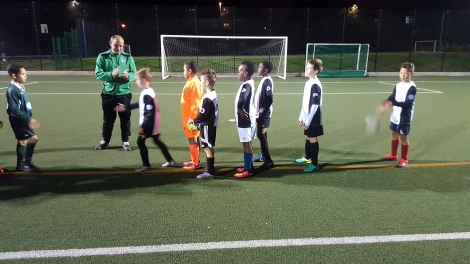 Despite having not played with each other before, the boys gelled immediately, both in terms of their footballing understanding and also socially, with handshakes, cheers and back pats a reoccurring feature throughout the night.

Another feature was the intricate passing combinations that the attacking players made, with Jaiy, Bobby and Cian almost reading each other’s mind! Later in the game Jeval joined the party and he too linked up beautifully with the two in central midfield.

At the back, James was a rock, sticking to his defensive duties perfectly. On either side of him the pacy Fareed and Navaro provided ample width and a willingness to charge up and down the pitch.

In goal, Tyrese Featherstone made his debut for the district and didn’t put a foot, or hand, wrong all night.

The opposition, including under 10s player Telpher, should be applauded for their refusal to give up or drop their heads. They continued to create chances and did their club proud. Everyone connected to the Ton would like to wish the Sutton lads the very best as they continue with their season. Well done boys!

Man of the Match: After such a brilliant team performance, I think it would be remiss of me to pick out an individual for special praise.