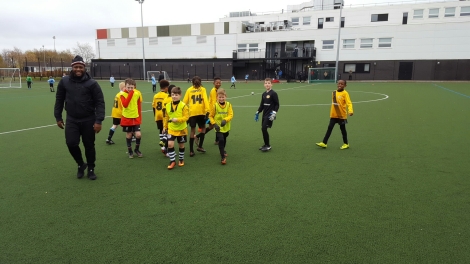 Man of the Match: It’s hard to pick one player following a performance like that.

With Christmas fast approaching, East Birmingham visited Heartlands to bring the curtain down on the first half of the BPSFA League. With Sutton breathing down our neck and with a game in hand on us, we knew a win was required if we were to celebrate Christmas from atop of the BPSFA league, as well as the WMCSFA league.

The game was an example of what this set of talented lads can do when they click into first gear. A bag full of goals and a clean sheet. Perfect.

However at the same time, the East Birmingham boys should be commended for their refusal to throw the towel in and give up. Despite being behind from the first minute of the game, the East lads continued to scrap and fight until the final whistle. In fact they had the better of the second twenty and were unfortunate not to score whilst on top.

From a Ton point of view, some of our goals were majestic. One goal in particular stands out. During the final third, whilst under pressure from the East striker, Danny and Taylor calmly played the ball out of danger and into the feet of Cian T. Spotting Ilani in space, Cian played the ball out wide to the Ton Captain who played a neat one two with Cameron before crossing for the Marsh Hill striker to finish off the sensational move by rifling the ball into the roof of the net.

Over all the result is irrelevant. The performance and the manner in which the boys adapted to the new 3-3-2 formation was the most pleasing thing about the game. All 12 boys should be incredibly proud of the part that they played in a brilliant team showing.