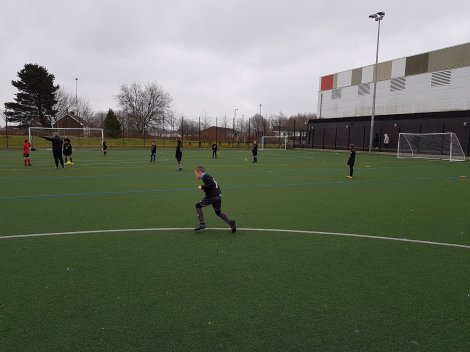 Man of the Match: Toby – With standout performances from Daniel and Callam and an incredibly encouraging u11s debut from Cian, it was Toby who collected the MOM award for a performance that drove the team forward, especially during a second half which saw us control the game for long periods.

With fourteen players absent, some for completely genuine reasons and others for reasons that still remain unknown, and with temperatures below zero, it was certainly a tough day at the office for The Ton. However, don’t be fooled by the scoreline, this wasn’t a walk in the park for Sutton Coldfield. Our young stars made them work for their victory and arguably had the better of the second half with a performance of guts and determination.

Each of the opening three goals went the way of Sutton Coldfield, although in hindsight we played a part in each of the goals through individual errors. Yet full credit to Sutton Coldfield for pouncing on these mistakes and for finishing clinically. There was certainly no fortune about the way they slotted the ball away even if we did make mistakes in the buildup to each goal.

Our half-time team talk focused on the positive work of Callam and Cian S, who both constantly plugged away at the Sutton back-line in an attempt to release a teammate in on goal. We also discussed the improvements that were required from individuals, most notably the need to work harder and be more aggressive when attempting to win back possession.

With these words in the forefront of their minds, the boys started the second half like a different team. With Toby tightening things up in midfield and now alongside Daniel, the spine of the side was far more stable and this allowed the boys to claw themselves back into the game. Despite the best efforts of the retreating Sutton defender to clear the ball from his goal line, the linesman rightly flagged to say the ball had crossed and with 25 minutes remaining, the boys were given a needed shot in the arm. Now full of energy and commitment, our hardworking boys created five or six excellent chances, only to see them go amiss. Nevertheless the lads were now truly playing for their jersey and for each other.

The cruel nature of football reared its ugly head for the second week in a row, as Sutton scored two late goals to knock the stuffing out of the lads and put a gloss on the scoreline in a game they undoubtedly deserved to win, albeit not by such a commanding scoreline.

The best thing about football? There’s always next week!

A quick word for the three boys who had to play for Sutton Coldfield under 10s against Gloucester under 10s after a number of their teammates simply did not turn up. The Sutton manager Ben was full of praise for the hardy trio of Jeval, Tavani and Kayden, the latter of whom was “the best player on the park and amazing considering he is only in year four”.

While challenging for a number of obvious reasons, yesterday was a tine to reflect on the efforts of our lads in awful conditions.