Man of the Match: Daniel – he could not have given it more than he did. By the end of the game, he was out on his feet after supporting Cian in attack and protecting the defence all game.

Just like buses, trophies seem to come along in trios for The Ton! In a little over a month, the boys have gone from having nothing to show for their efforts this season, to having three trophies – Daniel Sturridge Cup, Midlands Challenge Trophy and Chris Smith Cup.

Both factors only go further to highlight the fantastic achievement of the boys in yesterday’s final.

Against a Sutton Coldfield side who have been a huge credit to the BPSFA in 2017/18, winning four trophies so far and with another four in the pipeline, The Ton boys were certainly the underdogs going into the showpiece final. Pre-match talk centred around the need to stay positive and weather any storm that came our way as a united team. There was talk of noththing else. Unity was all we asked of the boys.

The first half was most notable for the return of captain Tyrese. Injured since the turn of the new year, the Birches Green shot stopper and leader has been sorely missed. A Ton stalwart for two years, 2017/18 has been far from kind to our formidable keeper. Yet while the blow of losing our number one was a tough one to take, it provided Padraig with an opportunity to step into the breach and he has done so with distinction since the start of 2018. So good has he been, that Padraig was deservedly named joint captain for the final, in acknowledgement of his importance to the side.

The opening 25 minutes was a tight affair, with neither team creating many clear cut chances and both threatening most from set pieces. Yet with Tyrese in goal and commanding his area brilliantly, Sutton were unable to capitalise from several dangerous balls.

Throughout the team, the boys defended valiantly as a unit. The moment one player lost the ball or was caught out of position, there was another Ton player there to back them up. This was the most pleasing feature about our first half effort.

The second half started brightly for Sutton Coldfield, as the Royals looked dangerous down either wing. A change of formation saw Tavani and Reece switching sides and this seemed to stem the flow of Sutton attacks. Tavani in particular was tenacity personified.

In the centre of the park, Daniel and Callam covered every blade of grass in their quest to open up the Sutton back line while protecting James, Mason and Klechai from the dangerous Sutton attack. Despite missing some talented defensive players, the back-three, now supported by Padraig, defended every ball by putting their bodies on the line and standing up to everything that Sutton had to throw at them. They were incredible.

As the game continued to open up, it was Callam who came closest to breaking the deadlock as he thundered a ferocious free kick cannoning off the crossbar. Yet rather than dwell on his misfortune, the midfield magician attacked the rebound and drove into the Sutton box. With two players on his back, he was forced to the ground and rightly awarded a penalty, which he calmly and bravely stepped up to take. Striking the ball low and to the right of the keeper, Callam reeled away in delight as his penalty nestled into the net to give the boys a 1-0 lead.

With 15 minutes to play, Sutton pushed forward in numbers in a bid to level the game, although inevitably this made Cian dangerous on the break. On one such occasion, the SS. Peter and Paul forward finished brilliantly only to be ruled offside.

Regretfully for The Ton, the game remained evenly balanced at 1-0 with plenty of time left on the clock.

A double substitution brought much needed reinforcement to the team, with Oliver strengthening the left hand side and Rhys shielding the defence in a deep lying midfield roll.

Twelve long minutes of determined, unwavering defensive work saw a number of the lads out cold on their feet. After running themselves into the ground, the boys had nothing more to give. The final whistle brought immense pride in arguably our biggest achievement of the season.

This victory is just rewards after a long season that has brought many tests for the boys. On a night they’ll never forget, the boys came of age. 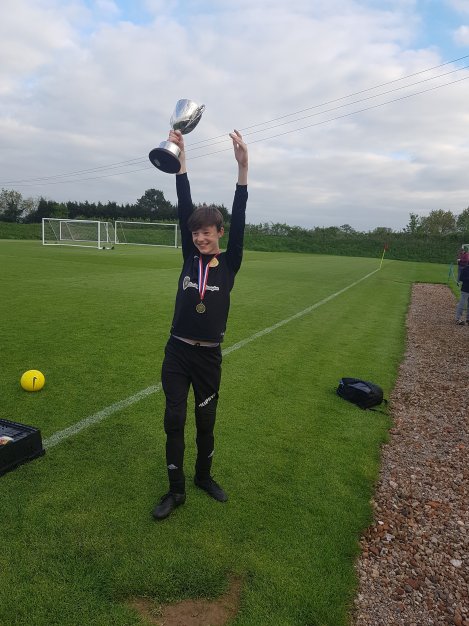