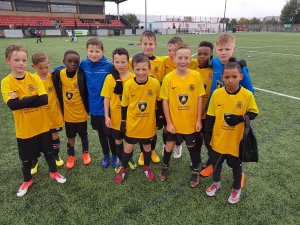 Committed. Passionate. Hard Working. Everything about the Gold team so far this season has been excellent. On Saturday they brightened up what had been a very difficult morning.

Passing the ball with confidence and using Kyran’s rapid pace, the boys raced into an early lead after a Lennon through ball was calmly finished by rampaging Kyran. Our lead was short lived though as the equally attack-minded South Birmingham Red levelled affairs with a well taken goal.

The middle third saw the boys push on and re-take the lead, once again utilising Kyran’s pace and willingness to run the channels. With Lennon driving the team forward from the middle of the part, the lads extended their lead to two goals when Kyran bagged his hat-trick to make it 3-1 to the boys in gold.

All over the pitch there were examples of the sort of commitment required to make this season a success. From players who had taken a knock the day before but were still giving it their all, to players who had played 60 minutes for the Black team immediately before the Gold game kicked off – this team has the sort of attitude that should be bottled and sold.

The final third provided youngest duo Keon and Lennon with a goal apiece; just rewards for their efforts. For the second game in succession, the dynamic duo linked up superbly to hurt our opponents.

With a birthday for Danny, debuts for Kian B and Noah, Oscar putting in a superb performance after joining the party at the eleventh hour and a hat-trick for Kyran, this game had the lot! It also ensured a rainbow shone brightly over a small corner of Castle Vale after a very stormy morning.

Thank you for your amazing effort!