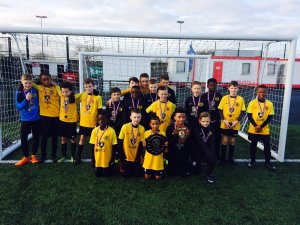 Man of the Match: Joshua K

Man of the Match: Wiktor

With the sound of Santa’s elves busily hammering away in their workshop reverberating around Vale Stadium, 2018 was brought to a close with the BPSFA Winter Shield.

This is the first season when Brummie districts have had a ‘second’ team competing in the same competition as the ‘first’ team. While the sides might be colloquially referred to as the ‘B teams’, there is nothing less than A star about their football.

Opening with a 3-0 win against Aston, the gold team burst out of the blocks and put down a marker for their competitors. The goals came from the boot of Lennon, Kyran and Kayden, the latter of whom changed the game after coming on for an injured teammate.

On the adjacent pitch, the black team fell behind to an early Sutton Colfield goal and despite their best efforts to equalise, found the Sutton shot-stopper and woodwork insurmountable barriers. Despite the loss, there was plenty to be happy about going into the second round of games.

Next up for both teams was the all Erdington and Saltley derby! The gold team found their pre-game favourites tag difficult to live up to and encountered a black team in fine form. Defending resolutely, the black side took the lead when Kian C weaved his way through the gold team to slot past the onrushing Danny. This proved a wake up call for the gold team who threw everything they had at the boys in black, only to find Corey in fine form and the black shirts of Kamarni, Wiktor and Emron continuously throwing themselves in the way of shots and passes.

With Aston beating Sutton Coldfield 1-0, it meant the whole competition was wide open as the final round of fixtures commenced.

The gold team snapped out of their slumber and turned on the turbo boosters to power ahead against Sutton Coldfield. With Keon giving the boys in gold the lead, their black team counterparts knew they needed to find a goal in their goal against Aston. Alas, it wasn’t to be as the boys found themselves in the trenches for long periods of their game against the boys from B6. Defending in numbers and with great bravery, the black side had to settle for a very credible second place when Kyran made it 2-0 to the gold team.

A morning that started with festive cheer and Christmas jumpers, ended with both sides clasping medals draped around their necks! All 20 of the boys were brilliant and a credit to the district!

2018 has been a year of immense highs for Erdington and Saltley. It started way back in January as we lifted the Daniel Sturridge trophy and ended in December with the Winter Shield. In between there was also the Midland Challenge Trophy, Chris Smith Trophy, BPSFA 7-a-side and the WMCSFA 7-a-side. It’s not been a bad year at all.

The most exciting thing is the potential shown by the gold team all season and the knowledge that more is to come. Much more.