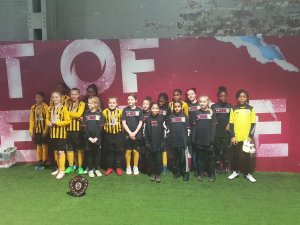 After winning the inaugural Eniola Aluko Shield in 2018, the girls took to the task of defending their title with gleeful abandon. Throughout the whole league campaign, both teams played with energy and with a joy to their efforts. They were superb – both teams!

Despite being made up almost exclusively of year five girls, the black team demonstrated the brilliant strides they have made over the past four months. They ended the second night of the campaign with four clean sheets, two victories and a pair of draws. They also picked up an excellent win against a brilliant South Birmingham A side. The attitude of the girls has been amazing all season and everyone is excited about the potential of these young ballers.

The gold team started the second half of the Eniola Aluko Shield knowing two victories would see them retain the title they won the previous season. After two wins in their opening two friendly games, the girls looked to all to be in fine form. The passing and interplay of their game was excellent as they started their tilt for the title with their first league fixture of the evening. After beating Aston B, the girls knew a victory against second placed South Birmingham A would bring home the title but that a defeat would send the title to the south of the city. An excellent 4-1 victory meant the girls ended their campaign with five wins from their six games, with a draw against Erdington B the only time they dropped any points.

Well done girls! Both teams were brilliant and continue to do us proud!