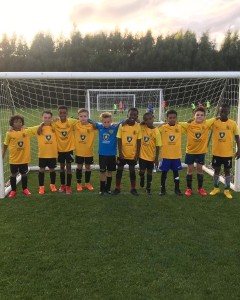 Man of the Match: The whole team for an outstanding performance!

A week after impressing against Birmingham City FC, a selection of the under 10s took to the field against another academy side, this time travelling down the road to Coventry City FC.

Despite a confident start, the team was shook up after the first quarter with the under 9s trio of Kian, Andrius and Cairo coming into the side and adding a spark in front of goal that saw the boys take a one goal lead. However, the lead secured through the boot of Kian was short lived when Coventry City equalised almost immediately.

This blow was not enough to undo the great work of the boys and they bounced back in style, scoring four more goals without conceding.

With Reo and George marshalling the back line and Jack in confident form, the boys were secure defensively, allowing the attacking talent of Ebrima, Mahliq, Cairo, Kian, Uzi and Andrius to flourish. At times, the movement and passing of the lads was a joy to behold and it certainly made people sit up and watch on what was a warm summer evening.

Roll on the season!