Erdington and Saltley A 2-1 Wolverhampton 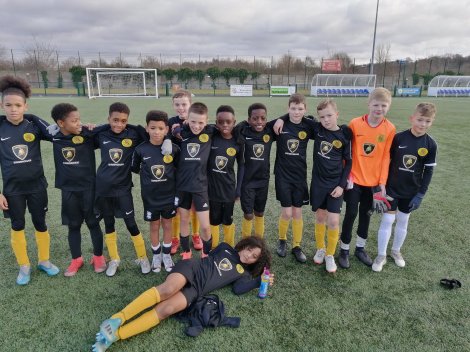 Erdington and Saltley U11 6-0 Gloucester

Man of the Match: Lennon – controlled the game from the centre of the park

Man of the Match

For what seemed like the first week in an eternity, there was no rain or frost to greet us at Vale Stadium as we prepared for another week of district football. The sun was almost out and the temperature was a lofty seven degrees. Tropical. Perfect weather for football.

On the pitch, the under 10s were in action, with the A team locking horns with Wolverhampton and the B and C teams crossing paths in another Erdington derby.

Both games were incredibly enjoyable.

The Erdington derby saw the B team control proceedings during the opening half, while the tables were truned during the second period when the C team played their best football of the season. Spearheaded by Kian, the B team romped into a 4-1 lead, only to see the C team claw their way back into the game thanks to some resolute defending from Toby and some creative wizardry from Daniel. Unfortunately for the C Team, their B team counterparts scored two late goals to give themselves some breathing space.

On the adjacent pitch, the A team started brightly against Wolverhampton, only to see their Black Country rivals have the better of the attempts on goal. Fortunately for the Ton, Jack was in inspired form between the posts and kept the score goalless with 15 minutes on the clock. At that stage, Uzi popped up to score and give the boys a one goal lead to take into the break. During the second period, Wolverhampton equalised, only for the Ton boys to retake the lead within a couple of minutes. Throughout the game, all of the boys shone, with Cairo and Omari joining Jack for high praise.

Just over an hour after the under 10s kicked off, the under 11s played Gloucester for the second time in three weeks. Following on from a 6-2 victory in Gloucester in November, the boys were determined to earn themselves their first clean sheet of the season.

Over the course of the game, the lads once again bagged themselves six goals thanks to some superb passing and incredible teamwork. Results have been excellent this season, although the most pleasing thing about the 2019/20 campaign is the friendship that’s developed since September. The boys back each other up and work tirelessly for one another. Their commitment to the team is undeniable.

Markie bagged another four goals to make it 67 for the season and Chase made it three goals in two games against Gloucester by bagging a brace.

Goals often earn the headlines, but it was the defensive stability of the side that deserves to steal the limelight this week! From Keon and Jason marauding up and down the wing, to Josh covering every blade of grass on the pitch, the determination shown by the lads to protect their clean sheet was a joy to behold. Danny, Ethan, Hughey, Reo, Oscar and Jahkadi deserve huge credit for their defensive play and with a bit of luck and plenty of hard work, it’ll be the first of many!