The curtain was finally brought down on the most amazing season in the history of this sensational district. Here are the highlights of this season:

Under 11s Player of the Season – Troy Smikle-James

Under 10s Player of the Season – Ilani Edwards 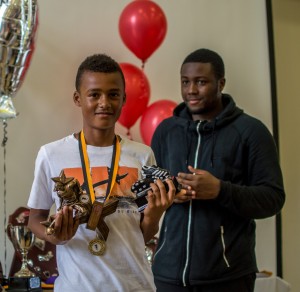 Our first ever girls team.

A season to be immensely proud of. A season to smash all other seasons!

All of this was achieved through hard work, teamwork and an amazing attitude to everything that we did. We achieved all of the above due to the brilliant relationship between the parents, players and coaches. World class!

However before signing off, it’s only right to have one last match report:

After standing on the sidelines for 12 months and thinking they could do it just as well as their sons, the parents took to the field to show the kids how it should be done. However, as many would have predicted prior to the game, it didn’t really go like that! It was evident to all present, that the lads got their footballing skills from their grandparents!

Roaming the centre of the park like an injured lion, Rio’s dad had none of the energy or desire displayed throughout the season by his son. Whilst Ilani’s dad matched his son’s ability to get box to box, his shooting was like something from the rugby pitch rather than the football pitch! King Paul of Jersey showed he could talk the talk but not walk the walk, whilst Sam’s dad showed the agility of an elephant between the posts. The list is endless, so I’ll leave it to these pictures to tell the full story… 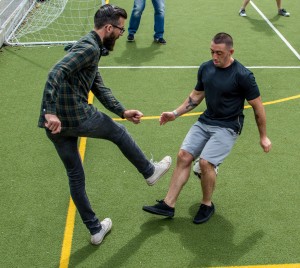 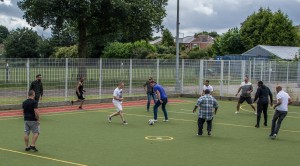 All joking aside, the match was a perfect example of why we are such a great district. It was played in great humour and spirit, with all of the dads (and mum) diving head first into it and giving it their all. Despite my tongue in cheek write up above, there was some great football on show too!

It’s with a heavy heart that we say goodbye to the class of 2016. We wish them all the very best as they start secondary school and know they’ll be a huge success if they show the same attitude that they’ve shown all year.

Thank you too parents. You’ve been a key factor behind the success of this team and a pleasure to work alongside.

Have a great summer everyone!