Under 10s Team and Scorers:

Under 11s Team and Scorers:

“The best game of my life and an amazing day!” That’s how one player described our day trip to Cardiff and Barry Island and they weren’t wrong! It was an amazing day enjoyed by all.

After a 7:30am start, we arrived in Cardiff shortly before 11am tired but excited.

Despite a long journey, the boys were on fire on the football field, finishing the day unbeaten and without conceding a single goal. Both teams played some excellent football and gave us lots to be excited about prior to the season kicking off at the end of September.

The under 10s grew in confidence as the games went on, finding fifth gear during their final match of the day when their high pressing and incredibly energetic play brought them great success against Afen Nedd. It was a joy to see them playing as a team and working their socks off as they chased down every balling, leaving their Swansea based rivals with little to work with during the game.

Over on the 3G pitch, the under 11s were equally as tight when it came to the art of defending, also conceding no goals throughout the day. In front of goal, Jaiy popped up with a quickfire goal after 20 seconds of the first game, while Olly bagged himself a brace and Mason his first goal for Erdington and Saltley. In fact the boys could have ended the day with more than four goals, if only they’d had a bit more luck in front of goal.

With the action out of the way, it was onto the main event – Barry Island! 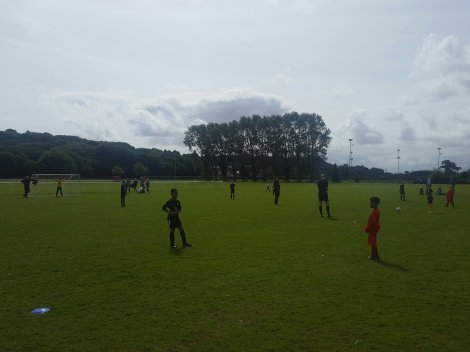 Fun and frolics on the beach, splashing in the sea and high jinks at the fair for all! It was a truly brilliant day that further cemented the bonds and friendships developed during the residential trip to the Brig House a week before. This season we have purposely done more away from football with the boys in a bid to develop a strong team spirit amongst the squad and based on the evidence seen on the Barry Island bumper cars, its a decision that is beginning to pay dividends!

Well done boys! What a day!