Man of the Match: Aidan – one goal conceded all day is testament to the effort of the team but also the excellence of Aidan, James, Louie and Tyrese who spent the majority of the morning in defence. Aidan had a great game at the back, as well as pushing forward into midfield to start a number of attacks. 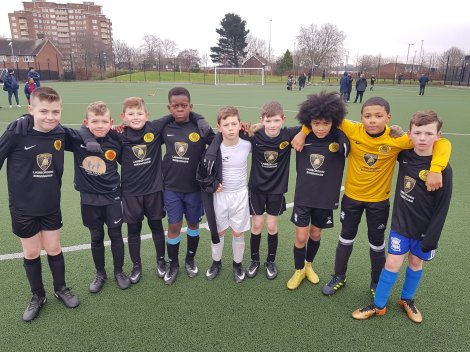 With the games limited to a brisk eight minutes, goals were a premium and clean sheets plentiful for the lads as they attempted to lift the county 7-a-side title for the first time ever. First up in the group was Sutton Coldfield, with both teams cancelling each other out and the scoreline remaining goalless.

The second game against Aston was better in terms of the number of chances created, with the lads being far more positive in possession and when attacking. Alas a goal remained elusive and the boys picked up another 0-0, as Tyrese remained a spectator throughout the game, never touching the ball.

With a win required against Harborne, the boys stepped up the intensity and threw caution to the wind, scoring their first goal of the morning to grab a vital three points.

Last up in the group stage was Wolverhampton in what was effectively a knock-out game, with both teams equal on points and goal difference. After another goalless game, Jaiy, Callam and Cian ensured we qualified for the semi-final after all converted from the spot in a tense penalty shootout. However a special mention must be reserved for Tyrese after he pulled off a stunning say to repel the first Wolverhampton penalty and reduce the pressure ever so slightly.

With the lads 8 minutes from the final, they squared up against South Birmingham, only to be undone by a couple of dissapointing decisions. However these things happen and the lads showed tremendous spirit as they threw everything at South in their quest for a place in the showpiece final.

While it was obviously dissapointing to exit the competition in such a manner, we are all proud of the lads for everything that they gave for The Ton. On another day luck might have gone our way but it wasn’t meant to be and all congratulations must be reserved for eventual winners Sutton Coldfield who now go on to represent the West Midlands in the Midlands round of the competition later in the year.

As for us, we will pick ourselves up, dust ourselves off and go again.

Well done Lads! You did us proud!