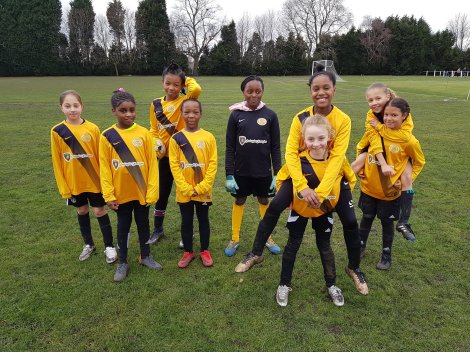 Well that was tough to take! So far this has been a season of historic achievements but even then this defeat was a blow.

After slipping behind to two early South Birmingham goals, the girls gave themselves so much work to do. However these girls are a fine group and they are a resilient group. Twenty minutes after falling two goals behind, they were leading 3-2 and in the ascendancy.

Then disaster struck once again. In the space of ten crazy minutes, the girls went from leading 3-2 to losing 6-3.

Once again they weathered the storm and took the blow in their stride, bouncing back to dominate the final third, pulling a goal back to make it 6-4 to South Birmingham.

Alas despite considerable Ton pressure, the girls were unable to turn the game on its head for a second time and had to accept defeat for the first time this season. As mentioned at the outset, this season is historic! Erdington and Saltley had never won a trophy before in the girls’ footballing arena, yet here they are with two to their name and half a season to play.

The girls have been amazing all season and will continue to be throughout the second half of the year.

Well done to South Birmingham who were deserved winners and we wish you the best of luck in the final in May.

As for us, we’ll pick ourselves up ready for the visit of Middlesbrough on Saturday!