Erdington and Saltley (Boys) vs. Middlesbrough and Afan Nedd

Erdington and Saltley (Girls) vs. Middlesbrough

Man of the Match: Toby – excellent work in defence and attack from the combative schemer

Man of the Match: Klechai – with energy and pace in abundance, the midfielder caused problems for our oppenents all day, before grabbing a sweet goal of his own.

Girl of the Match: Latia for her hold-up play upfront and lethal finishing AND Millie for her excellent defensive reading of the game. 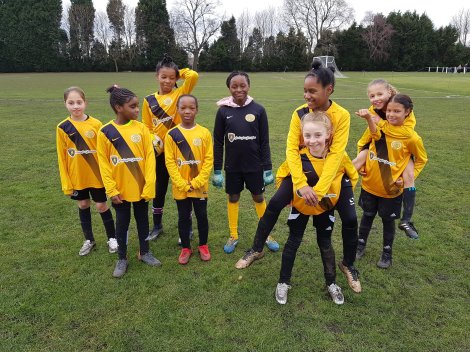 What a day! Yesterday was the first time we have ever had our under 10s, under 11s and girls all playing on the same day, at the same venue. To do this on home soil in Erdington made it even more special. The district was re-established in 2012 with one under 11s side, no kit and no home ground. Thanks to the support of many people, most notably the late Bernard Day and secondary school stalwart Pete Mortiboys, the district made it through that first season and the rest is history. In the week when our 2013 captain Dermot signed scholarship forms with Manchester United, it was amazing to have approximately 80 children, 30 from The Ton, playing schools’ football at Hollyfields!

On the pitch the quality of play was amazing. The boys and girls of Afan Nedd (Wales) and Middlesbrough were a pleasure to host and they brought immense footballing skills with them from their respective faraway homes.

The girls locked horns with an excellent Boro side, whose girls were a credit to their schools and district. After building a commanding five goal lead, the Boro girls fought their way back into the game with three goals of their own. Up front, Latia was on fire, finishing four sweetly taken goals and causing problems for the Middlesbrough defence all day. Her physicality and strength meant she was able to hold the ball up brilliantly, bringing teammates into the action throughout the game. One such moment led to Tiana’s excellent goal and resulted in delirious celebrations from the two best mates.

Throughout the team there were girls taking responsibility and making significant contributions to the action. In defence, Millie had her best game ever for The Ton, reading the game brilliantly and forming a formidable partnership with Sami.

The girls were excellent and this will arguably go down as one of their greatest ever results and performances as a team. Although as stated at the outset, the Boro girls were also excellent and had the game been ten minutes longer, they could have conceivably turned the five goal deficit down, such was their fight-back!

Over on the 9-a-side pitches, the boys of Erdington and Saltley were split into under 10s and under 11s, with Alfie slotting into the year 6 side following the late withdrawal of a player. With Boro and Afan Nedd also having an under 10s and under 11s side, this was seen as the best way to test all of those involved.

Overall the boys’ teams had a brilliant day, remaining unbeaten and picking up six victories from their eight games and even more impressively, seven clean sheets from eight matches, conceding only one goal! A special mention to Padraig for his heroics in goal for BOTH sides!

With the lads keeping things incredibly tight at the back, the attackers were able to flood forward, safe in the knowledge that they were being covered by their teammates. With everyone supporting each other and pulling together, it was difficult for our opponents to break us down. Added to this some fantastic finishes from Alfie, Toby, Reece, Klechai and Daniel and tireless work from everyone else, it was easy to see why the boys picked up some great results!

A huge part of yesterday’s success was the attitude and skills of the 60 boys who were in action, as well as the commitment of the coaches and support of the parents. Both Boro and Afan Nedd made long journeys to Brum and sacrificed their whole day. Without such commitment schools’ football would be nothing! Thank you to all who made yesterday possible.

At the end of the day, once the goals were tidied away, 234 plastic bottles collected, 4 changing rooms swept and cleared, car packed and function room cleaned, we were able to relax for a moment and reflect proudly on how far we have come as a district since 2012!