Manor the Match: Cian T – showed incredible desire and passion throughout, whilst using the ball brilliantly, rarely giving it away.
A tough lesson was learned yesterday. Despite being on top for our fair share of the game and creating a number of chances, the boys suffered a defeat to match the one dished out by Jersey in 2016 after allowing their emotions to run wild. They saw first hand that hard work and talent can be undermined by poorly managed emotions. Through a tough defeat came a valuable lesson.
The game started with a bang as William put Ilani through on goal immediately from kick off. The Yenton captain unfortunately screwed his shot wide of the left post as the keeper came rushing out. It was a tough chance but one that showed we were up for it. It was a sign of things to come as The Ton spent much of the first fifteen minutes in the ascendancy, pressing all over the pitch and playing aggressively. The opening goal was a screamer! Cameron picked the ball up in centre midfield and burst forward before rifling in from wide right of the goal. The lead was deserved and was almost doubled when Cameron placed a free kick onto the bar.

However as the first half passed the half way mark, St. Albans grew into the game and started to create chances of their own. They were now quicker to the ball and successfully knocked us from our stride. They deservedly equalised after a free kick was saved by Gerard and the rebound tucked in by the unmarked Saints striker.

The second half was a great spectacle, as both sets of players gave it everything they had. However with seven to go and the score level at 1-1, the game swung into St Albans favour after they converted a penalty and scored a second shortly after.

On reflection had the game been 43 minutes long, you’d be hard pushed to say we deserved to lose. However the game was 50 minutes long and St. Albans were good value for their win in the end. We matched them for hard work and skill but were outdone on the mental side of things. After the game the boys reflected with great maturity and will definitely grow on and off the pitch as a result of yesterday’s lesson.

Within an hour of the game and nestled amongst Green Island’s rock pools, the defeat was but a distant memory as the boys scrambled around in search of crabs. That’s the beauty of this festival. The football is secondary to the social side of things.

After lunch the lads, along with Plymouth, Dagenham, Wokingham, Potters Bar and St. Albans, headed to Aqua Splash for three hours of water based fun and games. The highlight of the afternoon was when 60 or so district players from around the country started to sing in unison, making it very clear their desire for the pool manager to switch the wave machine on! Although I don’t think he found it as amusing as us district managers did! 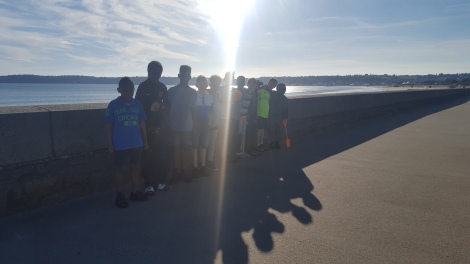 Before heading back to the hotel we stopped off at the beach for our second visit of the day. Sitting on the beach as the sun set, we amused ourselves for the best part of an hour by throwing stones at a bottle in the sand. Who needs technology?!

The evening concluded with a quiz night, although the less said about that the better. However as you asked so nicely, here are a few of the highlights:

As the clock struck 10 pm, all memory of the morning’s game had well and truly vanished.

Well done boys. You bounced back in style today after a tricky morning and showed great team spirit throughout the day. 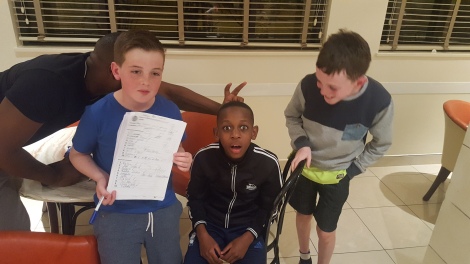